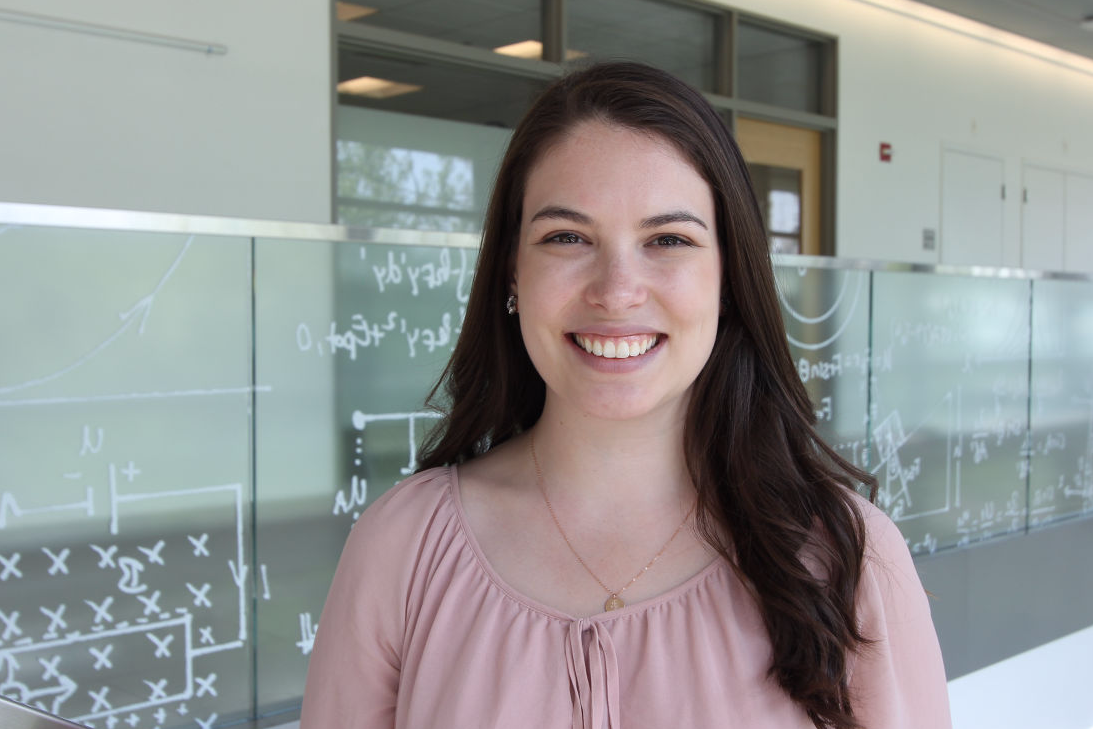 Mobirise
ABOUT ME
I am a Ph.D. candidate in the Biology Department at Georgetown University. I work in the Bansal Lab, where my research focuses on the interplay between human behavioral dynamics and infectious disease dynamics. Broadly, I address these questions using epidemiological modeling, network science, high-volume datasets, and spatiotemporal statistics. I am also involved in a variety of other projects related to infectious disease ecology, viral diversity and sharing, public health policy, and spatial statistics.
Casey's CV

HEALTH INEQUITIES IN INFLUENZA TRANSMISSION AND SURVEILLANCE
The lower an individual's socio-economic position, the higher their risk of poor health in low-, middle-, and high-income settings alike. We currently lack a mechanistic understanding of the impacts of low socioeconomic status (SES) on epidemiological dynamics, and prior work has demonstrated that this issue exacerbated by surveillance systems that overlook low SES populations. My work focuses on integrating empirical data from observational studies and large-scale healthcare data with models to characterize the dynamics and spatial heterogeneity of health disparities in an infectious disease case study: influenza. This work also identifies geographical hotspots of disproportionate influenza burden in low SES populations, and finds that these differences are most predicted by variation in healthcare utilization and susceptibility.  Addressing health inequities in respiratory infectious disease burden is an important step towards social justice in public health, and ignoring them promises to pose a serious threat to the entire population. These results highlight that the effect of overlapping behavioral social, and physiological factors is synergistic and that reducing this intersectionality can significantly reduce inequities. Additionally, health disparities are expressed geographically, as targeting public health efforts spatially may be an efficient use of resources to abate inequities.

This map demonstrates county-level estimation of the relative risk of influenza-like illness in low socioeconomic status individuals. Low SES individuals are more likely to experience influenza-like illness in the counties in blue. These areas are also likely overlooked by current influenza surveillance systems. More details on this work can be found here: https://www.medrxiv.org/content/10.1101/2020.03.30.20048017v1 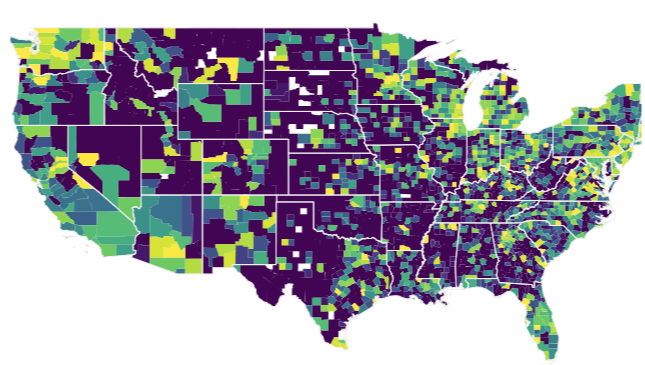 Vaccine hesitancy and refusal is heterogeneous across the United States. The data represents the number of childhood vaccination refusals by county, normalized to account for population size and reporting in each county.
(White: no data, blue/purple: no-low vaccine refusal, yellow/green: high vaccine refusal).

Vaccine hesitancy and refusal exhibits seasonal trends and are increasing over time in the United States. The data is normalized to account for seasonality in all-cause healthcare seeking behavior.

THE IMPACTS OF COVID-19 ON INFLUENZA IN THE UNITED STATES
The 2019-2020 influenza sentinel surveillance data exhibits unexpected trends. Typical influenza seasons have a small herald wave, followed by a decrease due to school closure during holidays, and then a main post-holiday peak that is significantly larger than the pre-holiday wave. During the 2019-2020 influenza season, influenza-like illness data in the United States appears to have a markedly lower main epidemic peak compared to what would be expected based on the pre-holiday peak. We hypothesize that the 2019-2020 influenza season does have a lower than expected burden and that this deflation is due to a behavioral or ecological interaction with COVID-19. We apply an intervention analysis to assess if this influenza season deviates from expectations, then we compare multiple hypothesized drivers of the decrease in influenza in a spatiotemporal regression model. Lastly, we develop a mechanistic metapopulation model, incorporating transmission reduction that scales with COVID-19 risk perception. We find that the 2019-2020 ILI season is smaller and decreases earlier than expected based on prior influenza seasons, and that the increase in COVID-19 risk perception is associated with this decrease. Additionally, we find that a 5% average reduction in transmission is sufficient to reproduce the observed flu dynamics. We propose that precautionary behaviors driven by COVID-19 risk perception or increased isolation driven by undetected COVID-19 spread dampened the influenza season. We suggest that when surveillance for a novel pathogen is limited, surveillance streams of co-circulating infections may provide a signal. 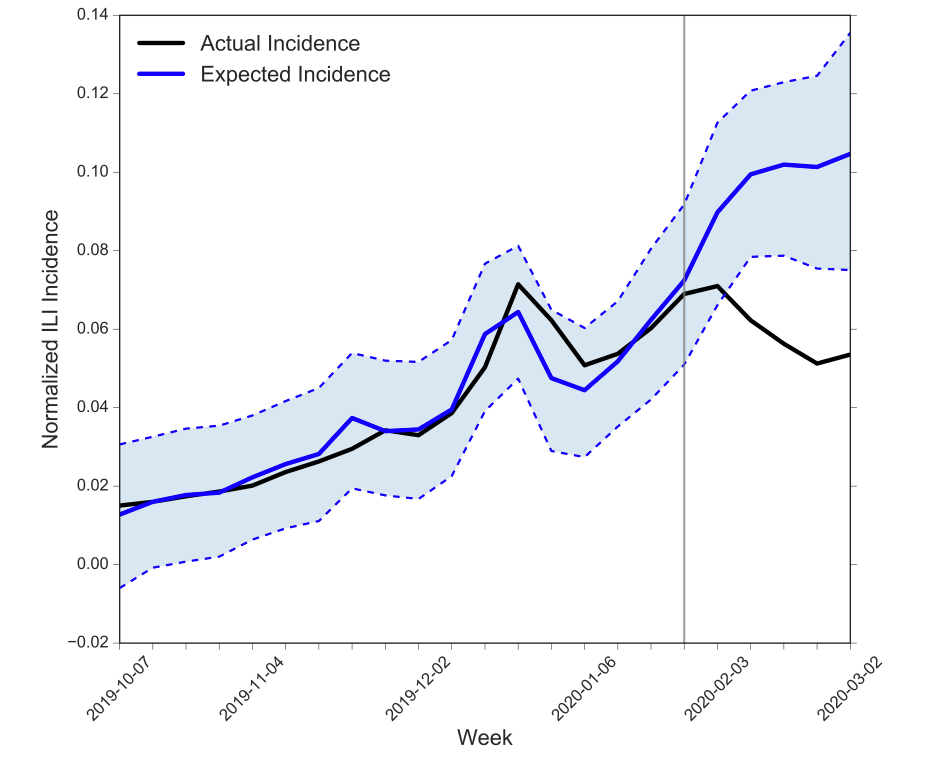 Influenza-like illness in the 2019-2020 exhibited a smaller peak with an earlier decline than expected based on prior similar ILI seasons. We propose that this is due to individually-motivated behavioral changes in response to COVID-19 risk perception, or due to ecological interaction with undetected COVID-19. More details on this work can be found here:  https://www.medrxiv.org/content/10.1101/2020.03.30.20047993v1

ESTIMATING GLOBAL MAMMALIAN VIRAL DIVERSITY
Present estimates suggest there are over 1 million virus species found in mammals alone, with about half a million posing a possible threat to human health. Although previous estimates assume linear scaling between host and virus diversity, we show that ecological network theory predicts a non-linear relationship, produced by patterns of host sharing among virus species. To account for host sharing, we fit a power law scaling relationship for host–virus species interaction networks. We estimate that there are about 40,000 virus species in mammals (including ~10,000 viruses with zoonotic potential), a reduction of two orders of magnitude from present projections of viral diversity. We expect that the increasing availability of host–virus association data will improve the precision of these estimates and their use in the sampling and surveillance of pathogens with pandemic potential. We suggest host sharing should be more widely included in macroecological approaches to estimating biodiversity. 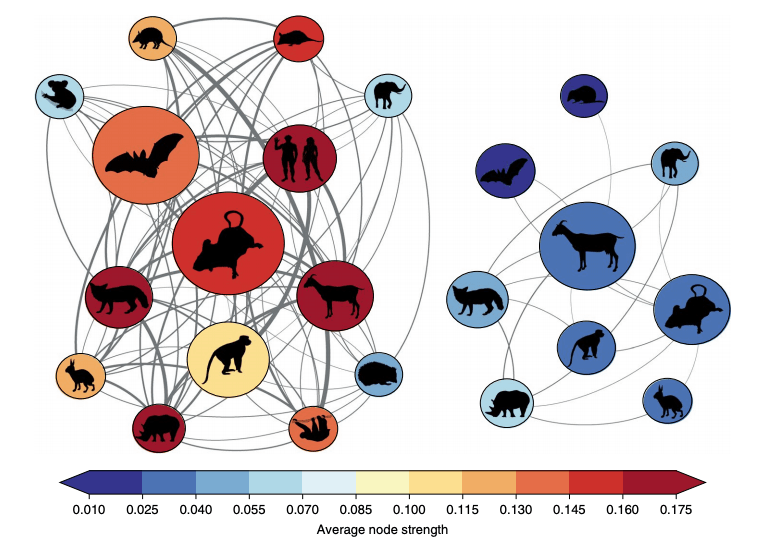 Viral sharing is unevenly distributed across the network, with a few groups (bats, primates, ungulates, rodents and carnivores) accounting for most of viral sharing; zoonotic viruses are shown on the left and non-zoonotic are shown on the right. Node size is proportional to number of viruses sampled.  Edge weight is proportional to the Jaccard index for viruses shared between host groups. Node colour relates to average node strength (calculated for each node as the sum of the
edge weights divided by the number of edges), where red is high average strength and blue is low average strength. More details on this work can be found here: https://www.nature.com/articles/s41559-019-0910-6

ASSESSING THE IMPACTS OF CLIMATE CHANGE ON NOVEL CROSS-SPECIES VIRAL TRANSMISSION
Between 10,000 and 600,000 species of mammal virus are estimated to have the potential to spread in human populations, but the vast majority are currently circulating in wildlife, largely undescribed and undetected by disease outbreak surveillance. In addition, changing climate and land use drive geographic range shifts in wildlife, producing novel species assemblages and opportunities for viral sharing between previously isolated species. In some cases, this will inevitably facilitate spillover into humans—a possible mechanistic link between global environmental change and emerging zoonotic disease. Here, we map potential hotspots of viral sharing, using a phylogeographic model of the mammal-virus network, and projections of geographic range shifts for 3,870 mammal species under climate change and land use scenarios for the year 2070. Shifting mammal species are predicted to aggregate at high elevations, in biodiversity hotspots, and in areas of high human population density in Asia and Africa, sharing novel viruses between 3,000 and 13,000 times. Counter to expectations, holding warming under 2°C within the century does not reduce new viral sharing, due to greater range expansions—highlighting the need to invest in surveillance even in a low-warming future. Most projected viral sharing is driven by diverse hyperreservoirs (rodents and bats) and large-bodied predators (carnivores). Because of their unique dispersal capacity, bats account for the majority of novel viral sharing, and are likely to share viruses along evolutionary pathways that could facilitate future emergence in humans. Our findings highlight the urgent need to pair viral surveillance and discovery efforts with biodiversity surveys tracking range shifts, especially in tropical countries that harbor the most emerging zoonoses.

The projected number of novel viral sharing events among mammal species in 2070 based on host species geographic range shifts from climate change (RCP 2.6) and land-use change (SSP 1), without dispersal limits.
More details on this work can be found here:  https://www.biorxiv.org/content/10.1101/2020.01.24.918755v1.full.pdf 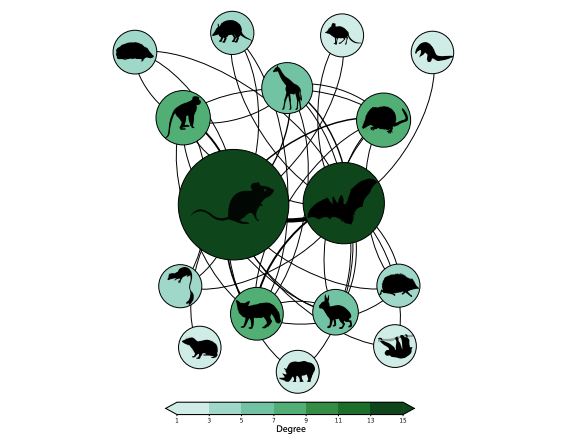 The mammal-virus network. The present-day viral sharing
network by mammal order inferred from modeled pairwise predictions of viral sharing probabilities. Edge width denotes the expected number of shared viruses (the sum of pairwise species-species viral sharing probabilities), with most sharing existing among the most speciose and closely-related groups. Edges shown in the network are the top 25% of links. Nodes are sized by total number of species in that order in the host-virus association dataset, color is scaled by degree. 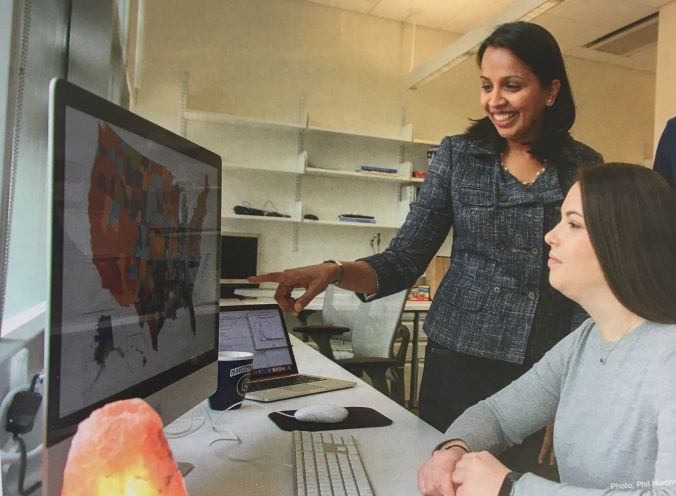 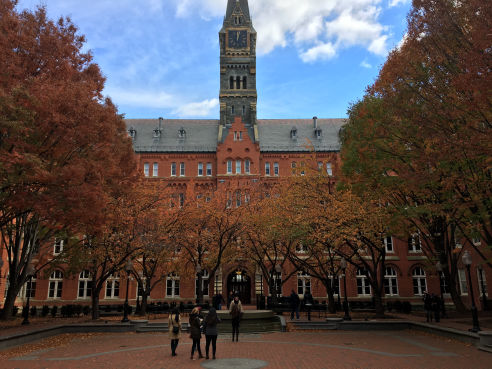 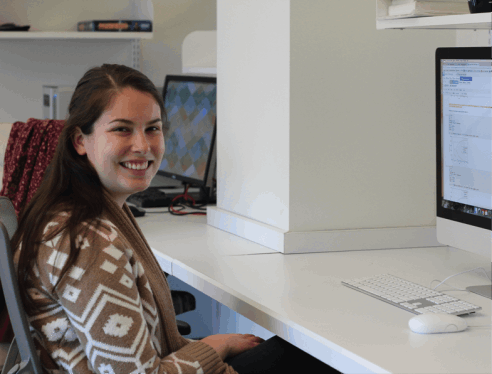 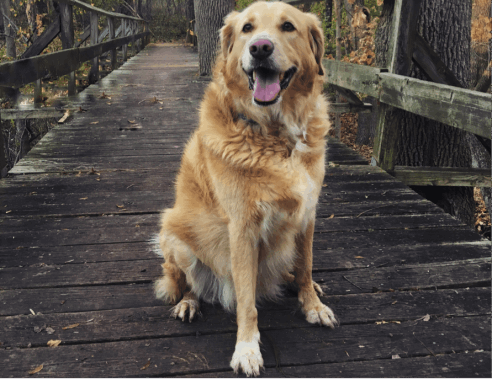